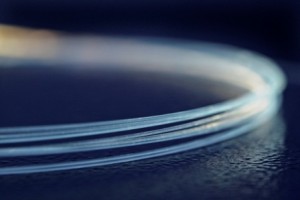 State-of-the-art is the one micron fibre laser, which has had a tremendous impact on many areas of laser technology: from cutting steel to medical and sensing applications. However, one micron technology is approaching the upper limits of practical output powers because the extreme optical intensity in the fibre core threatens to exceed the safe operating limits of the glass itself.

Bigger can be better! By increasing the wavelength of the laser radiation from one to two microns, the fibre core size may be increased, reducing the intensity in the core for a given output power and allowing a tenfold increase in “raw power.”

Advantages of two micron radiation: Perhaps even more important than the the increased power levels, a host of applications specific to this exciting (and currently under-utilised) region of the spectrum are enabled. The human eye is twenty times less sensitive to two micron than one micron radiation, so many expensive safety measures are unnecessary.